CUBC win Women’s VL for the second year in a row, coming second in the Overall VL. CUBC brought home 15 medals in 13 events, including Gold in every Lightweight womens’ crew event.

CUBC returned to Holme Pierrepoint in Nottingham this bank holiday weekend for the 2022 BUCS Regatta, with an ambitious array of entries across Champ, Intermediate, and Beginner events, including Development squad crews.

On the first day of the regatta, CUBC had six women’s pairs racing, as well as two lightweight singles, a lightweight double, and a Development Squad men’s coxed four. Every crew made the A and B finals, and won Gold in four of the events. Imogen Grant, doubling up into the Champ pair and Lightweight double made it a double gold day, sprinting into the lead in the final stroke of the women’s pairs race with Bronya Sykes. Caoimhe Dempsey and Adriana Perez Rotondo made it a 2/3rds Cambridge podium with a Bronze in the champ women’s pairs too. In the intermediate women’s pair, the duo of Alex Riddell-Webster and Millie Hopkins led from start to finish to win gold. An impressive performance also came from Newnham/Churchill pair of Rosanna Barraclough and Alice Dyson, a college crew, who came 4th in the same event. The men’s beginner coxed four had a fantastic race in their final, narrowly winning Gold in their first race representing CUBC.

Another busy day for the second day of the regatta saw 11 boats racing, 5 of them singles. The CUBC Development squad was back in action in the Beginner women’s coxed four and intermediate eight. All lightweight boats made their respective A finals, with strong performances from Jodie Cameron, finishing 5th in the Intermediate lightweight single, and Orlando Morley and Gianluca Maffi, finishing 6th in the Champ lightweight double. Imogen Grant tripled up, running from racing the eight’s repechage to the start of the Champ lightweight single final 18 minutes late, to win Silver in the LW1x, Bronze in the W1x, and Bronze in the champ eight later in the day. The lightweight women stormed to victory in the lightweight coxless four, while the Intermediate eight of Blondie/Lightweights had a fantastic race with a blanket finish, missing out on a Bronze by a canvas. 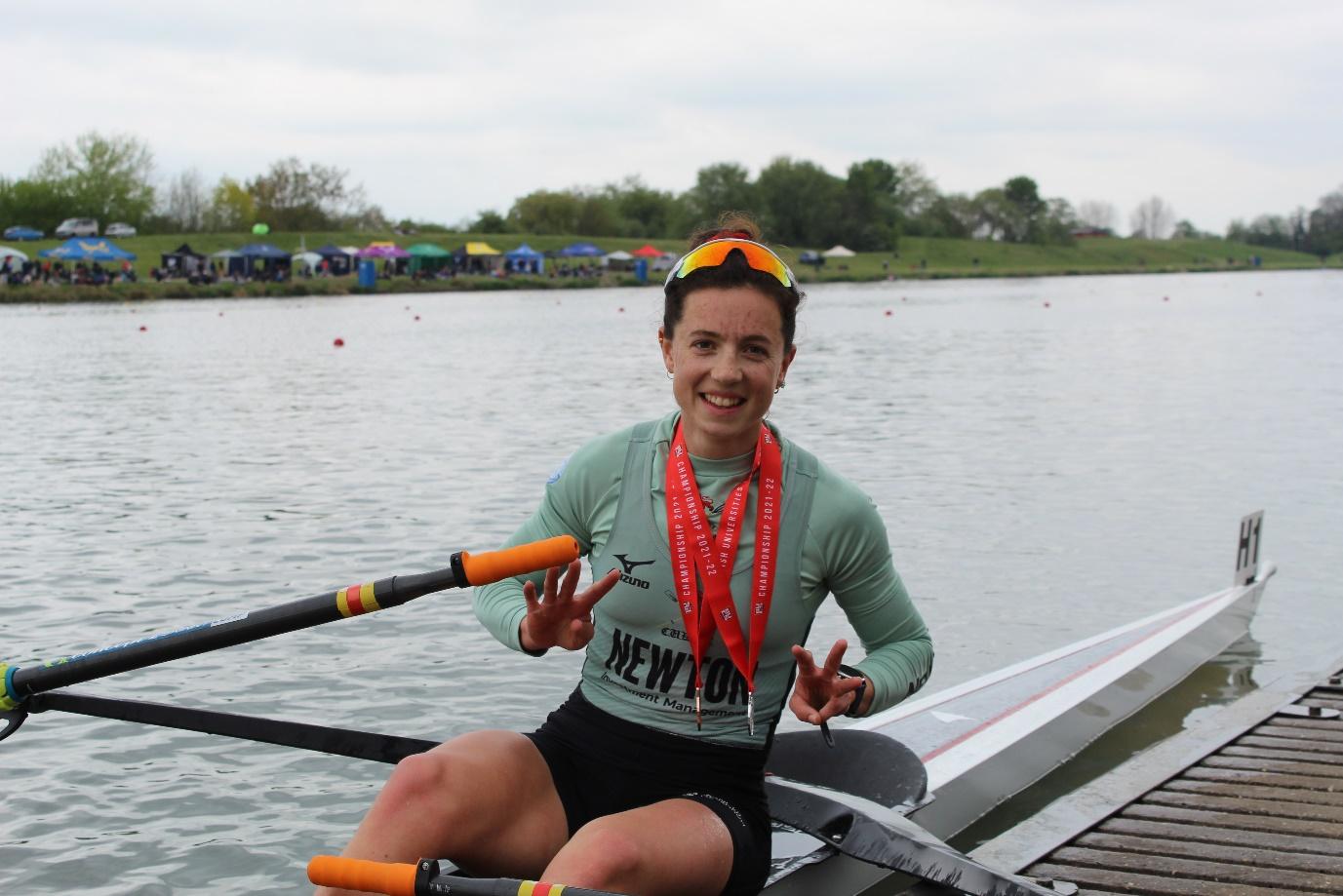 The final day of the regatta had 11 boats racing, and multiple athletes doubling up in events. Jonathon Markanday and Cameron Mackenzie from our lightweight men’s squad raced in the Champ men’s pairs, finishing in 5th place. The run of wins began with Gold and Bronze in the Lightweight women’s pair, followed by Gold in the Intermediate women’s coxed four. Gemma King, who was in the Bronze medal winning lightweight pair, then jumped straight into the Champ coxed four of Jasper Parish, Gemma King, Millie Hopkins, Paige Badenhorst and Caoimhe Dempsey half an hour later to hold off the field and cross the line first. It was then Caoimhe’s turn to jump out the coxed four and into the coxless four to repeat the achievement forty minutes later. The day was rounded out with the quad of Rosa Millard and Brigid Kennedy (Lightweight pair Gold), Jodie Cameron and Freya Sutcliffe winning yet another Gold and finishing the regatta on a high.

With all the fantastic racing over the weekend, there was no doubt who had won the women’s victor ludorum with 710 points, almost 200 points over second place. In the overall, CUBC placed second to Edinburgh University with 756 points total, cementing our position as one of the top rowing universities in the UK.

Final shoutout to all the college crews who made the trip to BUCS this weekend. Racing on a 2k lake is quite different to the Cam, and CUBC were really excited to see athletes enjoy the experience of racing at Nottingham