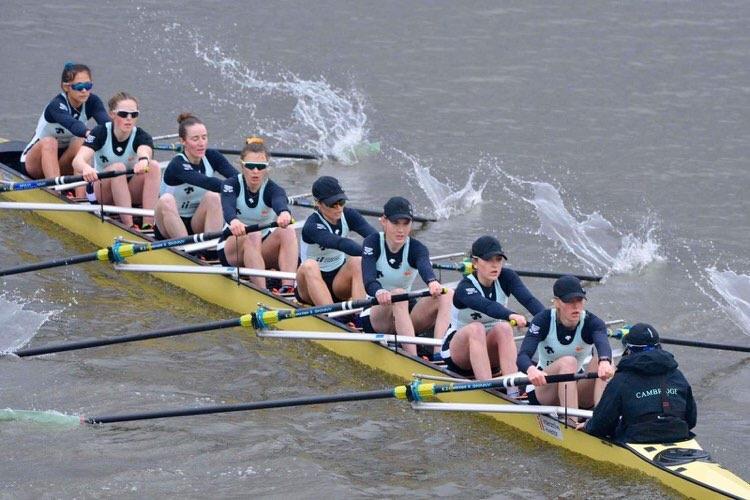 Yesterday afternoon, the 2020 Lightweight Boat Races, sponsored by Interactive Investor,  provided some of the most exciting racing ever seen on the Putney to Mortlake, Championship Course.

Umpire Clare Briegal (Murray Edwards College, formerly known as New Hall) started the crews from a “free standing” start, and the CUWBC women’s crew took the lead along the line of boats.  For both clubs, alumni and supporters, it was a special moment to witness the start of the first ever women’s lightweight Boat Race on the Tideway Championship course.

OUWLRC always produce impressive crews and they pushed back taking the lead around the outside the Middlesex Bend as the crews approached Barn Elms Rowing Club.  The crews battled to find the fastest stream and came in close, overlapping blades, which OUWLRC came out better from, increasing their lead.

Captain Catherine Walker (Gonville and Caius) remained calm and poised, driving her crew along, despite a really dramatic clash of blades between the stern of the OUWLRC crew and the bows of the CUWBC crew.  Cox Emily Insanally (Fitzwilliam College) pulled her crew back into a better place.  It was impressive to see CUWBC hold onto Oxford going through Hammersmith Bridge. As dark clouds gathered, the water became rougher, it looked a tough place to be on the water.  Cath Bishop (Pembroke College) described the crew as “terriers” and it proved right as the crew battled through the water. Coach Matthew Temple must have felt very proud as he watched his crew pull themselves back along the Chiswick Eyot.

Freya Sutcliffe (Jesus College) took a look at the opposition as the crew moved back alongside their rivals.  Coming past the Bandstand, Cambridge took the lead and were ahead going under Barnes Bridge.  The crew pushed to the Finish Line, winning by 6 lengths.

Many congratulations to Chief Coach, Robert Weber and Lightweight Women’s Coach, Matthew Temple, who are both proud of the performance.

The move of the Lightweight Women’s Boat Race from Henley-on-Thames to the Tideway has taken considerable negotiation from a key group of alumni across both clubs.  Fay Sandford (Gonville & Caius College)  has played a pivotal role in enabling this historic move.  Fay has worked closely with our counterparts at Oxford and with our team mates at CULRC to give our women parity.

Captain Catherine Walker reflects on the weekend as says,

“Sunday’s victory reflects seven months of hard work from both the squad and coaches. Going from down a length down under Hammersmith to a 6 length victory demonstrates the grit and determination of the lightweight women. We’d like to thank OUWLRC for an exhilarating race which has set up an exciting future for the race on the Tideway. We’d also like to thank all those who worked so hard to make the move possible, and helped us write history in light blue”

If you missed the live coverage of this epic race take a look at the YOUTUBE coverage here.

Read the race report for the Lightweight men’s race here.