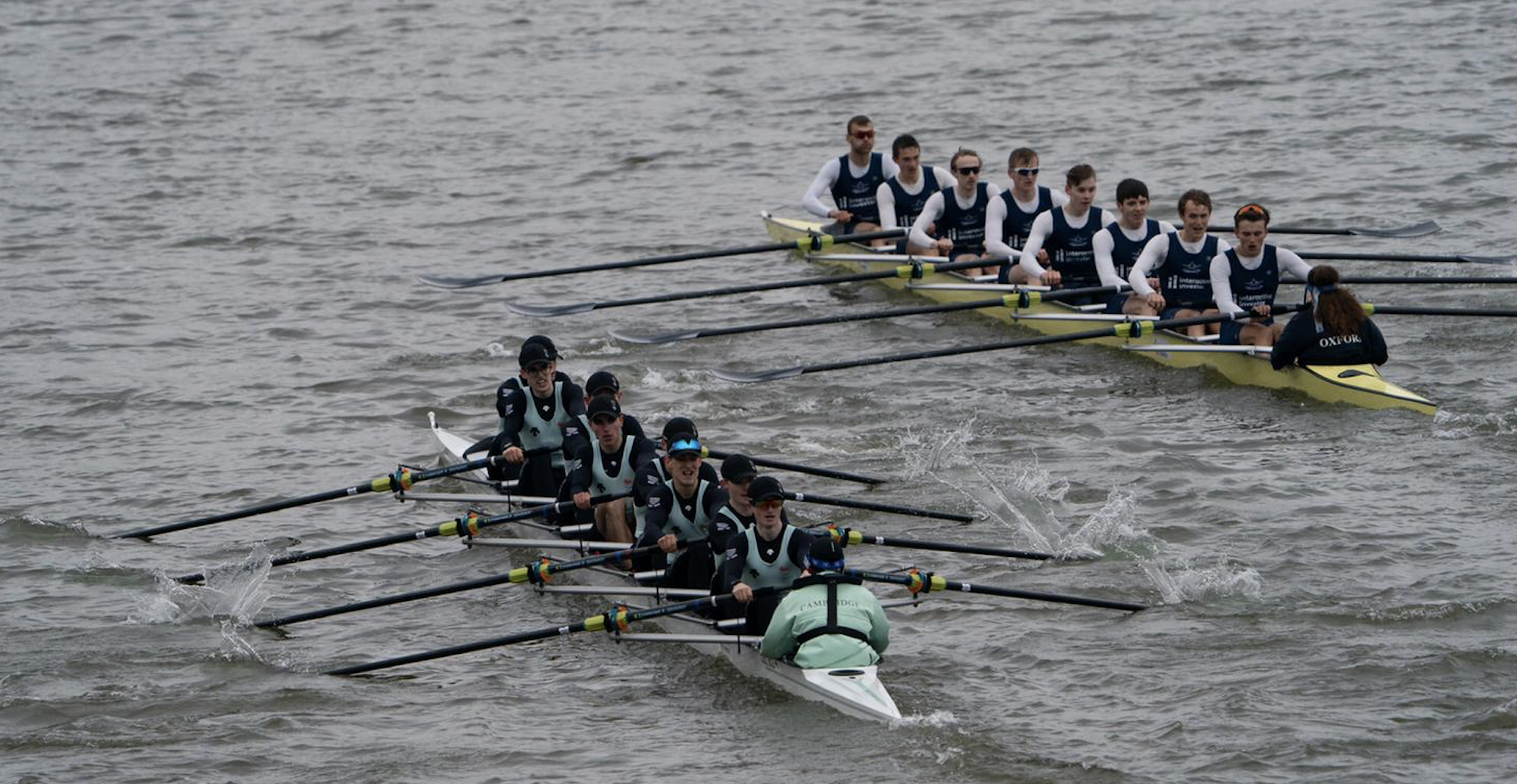 The Lightweight Boat Races on Sunday 15th March, sponsored by Interactive Investor, delivered some of the last races of the winter rowing season in dramatic style. Read the race report for the women’s race here.

The 46th Lightweight Men’s Boat Race was the second to be held along the Putney to Mortlake, Championship Course.

Umpire Caroline Lytton, started the crews from a free standing start, the crews were clean off the start with Oxford taking the lead. Commentators Cath Bishop and Robert Treharne-Jones provided blow by blow analysis of the race.

The crews approached the first bend a considerable distance apart, it was unclear at this stage who had the better water. Going past Fulham Football Ground, Oxford led Cambridge by 1 length.

Coming up towards Hammersmith Bridge, Cambridge held onto the Oxford crew, pulling back, taking the rate up to 36. The crew got back into the race, responding to the Oxford bursts.

Passing Hammersmith Bridge, Oxford took the lead to just about a length. The gap between the crews narrowed as the crews came through the bridge and hit the rougher water around the long bend.

At St Paul’s School, Oxford took clear water on our crew, every member of the Cambridge crew, straining to hang on to the Oxford crew.

2/3rds of the way along the course, Oxford had taken the lead as Cambridge continued to row very well, maintaining form as they worked to get back.

In the end there was no coming back for our crew, Oxford retained the title for the 2020 Lightweight Men’s Boat Club.

The whole squad is massively disappointed with the result on Sunday. We went in confident and had a good row but in the end Oxford were the stronger team. Despite this we have still had a successful season and look forward to taking part in any Summer racing that takes place, using this to start building into next year. A big congratulations to Oxford for a strong row.

“The Lightweight crew headed to London a few days before race day and had excellent outings along the course,
The crew felt ready on race day and were in good spirits, as usual! The race itself was extremely well rowed by both crews. Oxford pushed into the lead and despite our best efforts managed to get ahead at Hammersmith. The crew ‘went for the bump’ but couldn’t quite get the Dark Blue crew!

The crew were bitterly disappointed with the result, but also incredibly proud of their efforts and how they rowed the race. It was great to see so much Cambridge support on race day, including former trialists.

For my first experience of coaching a Boat Race it was hard to watch, but adds fuel to the fire to make amends next year. It’s been a pleasure to coach this group, with many planning to return next year. We will be looking for the same again, but faster!

Moving the Lightweight Races to the Tideway from the traditional race location at Henley-on-Thames has brought parity for all the crews representing Cambridge. The extensive coverage and support for the event this weekend would not have been possible without the support of Interactive Investor

If you missed the race, take time to watch the coverage on YOUTUBE